Join Us to discuss '100 Years of Women's Voting Rights' 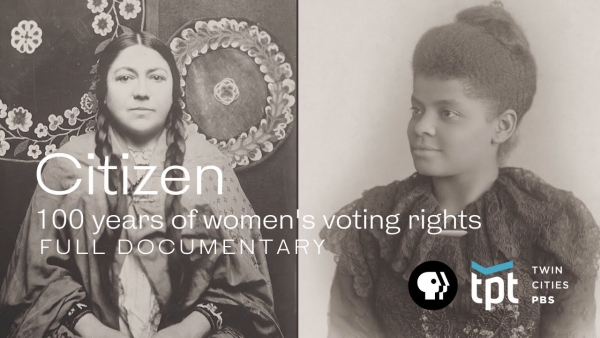 We hope you will join us this month as we discuss the documentary '100 Years of Women's Voting Rights.' We'll gather on Zoom Sunday, March 27 from 6:30 to 8 p.m.

Here's what you can expect from this month's film:

"Until the 1870s, women were considered the property of their husbands. Because of this, women weren't allowed to own property - and this even went to custody of their children. Women desired to be more fully part of the nation - to be considered full citizens and to earn the right to vote.

From pioneering activists of all races like indigenous politician Gertrude Bonnin to black Progressive Era leaders like Nellie Griswold Francis, the vote was seen as a mark of fuller citizenship and tool of change for concerns like healthcare, children, and women’s rights. Celebrate these suffragists on the 100th anniversary of the 19th Amendment with "Citizen"."

To join, simply watch the film sometime before March 27. You can do so for free right HERE.

Then, register HERE for the link to our Zoom session.

We hope you can make it!